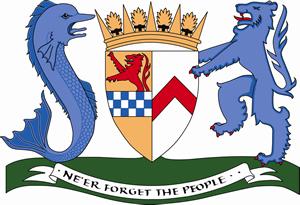 South Ayrshire Council was granted a Coat of Arms in 1996 comprising the shield of the former Kyle and Carrick District Council (1975-1996) which shows the chequered band of Kyle and the red chevron of Carrick now with a coronet to represent a unitary authority.

The monarch's eldest son usually holds the title of Earl of Carrick and it is currently held by Prince Charles in direct line from King Robert the Bruce whose mother was Mary, Countess of Carrick.

The left hand support is a blue dolphin that appears on the Burgh of Maybole Coat of Arms which was, in turn, derived from the Coat of Arms of the Marquis of Ailsa, whose family built Culzean Castle.

The right hand support is a blue lion which alludes to King Robert I, Earl of Carrick before he became King. The original Arms of the Bruce family showed a blue lion on a silver background before they assumed the Arms of the Lords of Annandale.

The Motto "Ne'er forget the People" was chosen from responses to a public competition and is from the poem "Does Haughty Gaul Invasion Threat" by Robert Burns.