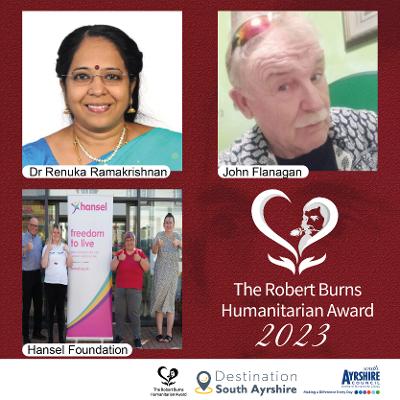 A consultant dermatologist specialising in leprosy, a man helping the homeless in the Philippines and a local charity supporting those with additional needs are all in the running for this year's Robert Burns Humanitarian Award (RBHA).

With Burns night fast approaching, Dr Renuka Ramakirshnan; John Flanagan; and Hansel Foundation have all been shortlisted as finalists for the RBHA 2023.

Dr Renuka Ramakrishnan is a consultant dermatologist and cosmetologist who has specialised in the treatment of Hansen's Disease (leprosy) for the past 30 years.

Based in Chennai, Tamil Nadu, India, she is fondly known as 'Doctor Amma' and has been recognised for her work in the treatment of leprosy on many occasions.

As well as a doctor, she acts as counsellor, mentor, motivational speaker, and educator. She is also a campaigner against breast cancer and crimes against women, children, and transgenders.

Dr Ramakrishnan said: "I am very much elated to know that I am one among the three finalists in the Robert Burns Humanitarian Awards 2023. I stood against all odds at the age of 16 and took it upon myself as a humanitarian duty to make a promise that I would become a doctor to serve these leprosy patients."

John Flanagan, from Oldham, has been living and working in the Philippines since 2010, helping the poor, infirm and homeless. John does this with no funding or sponsorship, but through his own funds and fundraising efforts. It is estimated that he has directly helped around 250,000 people since 2010.

John is a former drama teacher, DJ, and Public Relations Executive. Over the last 12 years, he has helped thousands of individuals and communities across the Philippines, including supporting people to find food, clothing, medical help, employment, homes, and toys.

He set up a Facebook page: "The Philippines - The People, The Faces, The Places, The Poverty" and has used this as a vehicle to drive awareness and to invite donations that support his efforts.

John said: "I was totally taken by surprise to hear that I have been shortlisted for such a prestigious award and very humbled that my efforts to help others is appreciated.  My work is entirely unfunded and I have no sponsorship of any kind since I decided to undertake my charity work back in 2010. The gratitude of the people and communities I have helped has been over-whelming and shows no sign of abating."

Hansel Foundation was founded in the Ayrshire village of Symington in 1963 with the primary aim of breaking down barriers faced by people with additional support needs.

The foundation was formed by Isobel and Tom Murdoch who bought Broadmeadows Estate on the outskirts of Symington to create a stimulating living environment for their daughter Lindy, who had Down's Syndrome, and other young people with similar support needs.

The foundation celebrates its 60th anniversary in 2023 and has greatly developed its services over the past six decades. The foundation now offers a range of residential accommodation and home support, respite, and short breaks, as well as employment, education, and enterprise through the Hansel 3e project.

A spokesperson from Hansel said: "We will be reaching our 60th anniversary of providing outstanding care and support to people with additional support needs across Ayrshire in 2023. The nomination is in recognition of the dedication of the organisation and our team members that have given to the many people who have been supported by Hansel over the past 60 years, which has undoubtedly changed many lives for the better."

Martin Dowey, Chair of the RBHA judging panel, and Leader of South Ayrshire Council, said: "This year's finalists stand out from the crowd as they are helping to transform so many lives, not only in this country but beyond. These three outstanding individuals epitomise the word 'humanitarian'. I am looking forward to the end of January when the winner will be revealed."

The winner of the Robert Burns Humanitarian Award will be announced on Wednesday 25 January 2023.