A Christmas Message from Iain Campbell Provost of South Ayrshire 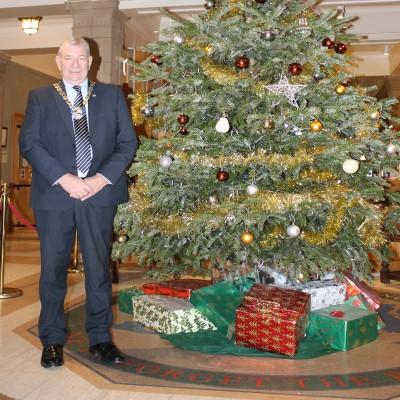 It's the festive season and the perfect time for me to look back and reflect on the past year, and all that has taken place since I became Provost.

I was very grateful to be given this role, as it takes me into the heart of our communities, and I have met some wonderful people over the last seven months.

One of the highlights was the Provost's School Footprint Challenge. This annual competition encourages school children to come up with inventive ways to tackle climate change. This year, the trophy was won by Girvan Academy. It was inspiring to find out about all the school projects taking place to help protect our planet.

It was a team from Belmont Academy that took top spot at the Sir Tom Hunter Challenge. Every year, Sir Tom challenges young entrepreneurs across Ayrshire to develop business ideas. I was impressed with the pupils from Belmont, who developed jewellery which could be worn on a night out and more importantly could also be used to detect a spiked drink.

The success of our young people would not be possible without the guidance of dedicated teachers and volunteers. In Dunure, John and Mhairi Eaglesham were recognised for over 35 years' service to the local youth club, a remarkable achievement.

It was an honour to be back in Dunure to open the Festival of the Sea. The festival which has been running since 2017, celebrates the maritime history of the village; it was a great day out.

The Merchant Navy has been a calling for many of my family, so it was a privilege to help raise the flag on Merchant Navy Day and remember all those that have dedicated their lives to this important service.

PoppyScotland launched their 2022 appeal at Ayr Town Hall. As the Council's Veterans Champion, I know how important this fundraising is with £2.3 million raised last year.

Housing is vitally important when it comes to veterans putting down roots. In Dundonald, Riverside Scotland are building modular homes with more 10% going to veterans from the Armed Forces.

The Council continues to support the Armed Forces through the Employer Recognition Scheme. I was delighted to accept an award in the Great Hall at Edinburgh Castle on behalf of the Council as we achieved a silver rating.

I opened the ceremony in Girvan to commemorate the 100th anniversary of the town's War Memorial. It was a memorable occasion, as the service which followed was a replica of the original service which took place when the memorial was unveiled.

A big part of this year was the sad loss of Her Majesty Queen Elizabeth II. Over seven decades on the throne, she touched the lives of so many and it was deeply moving to attend the Service of Thanksgiving at St Giles' Cathedral in Edinburgh. It was an experience I shall never forget.

King Charles has a close association with the Ayrshire Yeomanry and next year marks the 225-year anniversary of the regiment. Formed by the Earl of Cassillis, the yeomanry became part of the British Army in 1798 and I am sure there will plenty to mark the occasion in Carrick and beyond.

It has not been an easy time for our twinning associations of late, so I was delighted to travel to Crosne in France to represent Maybole as the two towns celebrated a 40-year friendship. It was an unforgettable experience as the French put on some wonderful events to mark the occasion, including a gala dinner and a Highland Games!

Christmas is a time of giving but it's also a time to remember those that struggle during the festive season. Now more than ever, spare a thought for those that might need help. If you can make a quick visit to an elderly neighbour living on their own this Christmas, I am sure it would be appreciated. It's these small acts of kindness that make Christmas a particularly special time of year.

Please also spare a thought for people who continue to work throughout the Christmas period, particularly for those who help to keep us safe and well.

Finally, I'd like to wish you all the best for the festive season and have a Happy New Year too.