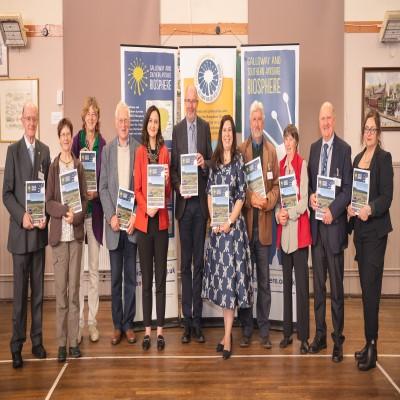 Held in the Biosphere Community of St John's Town of Dalry, the morning reception included the launch of The State of the Biosphere Report - the story of what the organisation has achieved since Galloway and Southern Ayrshire was awarded its UNESCO designation in 2012, and its goals for the decade ahead.

Invitees to the launch event included partners and supporters from across southwest Scotland, among whom were representatives from the three local authorities covered by the Biosphere region, and the Chair and Chief Executive of South of Scotland Enterprise, whose funding has empowered recruitment and expansion in the Biosphere's programme of delivery since 2020.

Following presentations by the Biosphere team spotlighting key current initiatives such as The Wool Gathering Project and Biosphere Footsteps, Ms McAllan spoke about how the UNESCO Biosphere model is pioneering solutions to the twin challenges of climate change and biodiversity loss, and meeting demand for transformational change.  Commending the leadership of the Biosphere's Director, Ed Forrest, its Chairs and Partnership Board, Ms McAllan described a hugely successful ten years with a demonstrable and collective commitment to environmental and cultural enrichment.

Galloway and Southern Ayrshire is one of a network of more than 700 UNESCO Biospheres around the world, all of which work collaboratively both locally and internationally in sustainable development, conservation, education and climate awareness.  With a strategic focus on achieving a just transition to net zero across Scotland, the GSA Biosphere is recognised as taking a leading role in helping the communities and economy of the southwest become 'green, fair and flourishing'.

Following her visit, the Minister said, "I was delighted to be in St John's Town of Dalry marking 10 years of the Galloway & Southern Ayrshire UNESCO Biosphere. As Environment Minister and being from the south of Scotland, the communities, landscapes and distinctive way of life in south-west Scotland is close to my heart. Over the past 10 years the Biosphere has been a shining example of the intrinsic link between environment, community and an inclusive, local economy. There is a strong connection between people and land in the south of Scotland and this is well represented by the Biosphere. I warmly congratulate them on a decade of success and wish them very well for the next ten years."

Melanie Allen, Chair of the GSA Biosphere's Partnership Board, said, "On behalf of the Partnership Board and team I would like to thank the Minister for joining us to celebrate this momentous occasion of the Biosphere's 10 year anniversary, whilst sharing her appreciation and understanding of the work and success the Biosphere brings to our people, businesses and community.  With ongoing support from SOSE and our three local authority funders, we are very much looking forward to progressing our UNESCO review and extending the Biosphere boundary into the Rhins of Galloway and marine environment. We look forward to developing existing and new partnerships at this very exciting time - the work of the Biosphere is more relevant now than ever before."

Councillor Alec Clark, Cabinet Member for Tourism and Rural Affairs who represents South Ayrshire Council on the UNESCO Galloway and Southern Ayrshire Biosphere Board said: "I was delighted to attend 'The State Of the Biosphere' event and celebrate the 10 year Anniversary of The Unesco Galloway and Southern Ayrshire Biosphere at the Town Hall in St John`s Town of Dalry on Wednesday 5 October as South Ayrshire Council`s representative . This was a milestone occasion for our Biosphere and a chance to look back on the good work of the last ten years and look forward with excitement to the years to come.

"Along with the Biosphere team and South of Scotland enterprise I was also very happy to be part of the team on behalf of South Ayrshire Council to welcome Màiri McAllan MSP Minister for Environment and Land Reform. The Unesco Biosphere which covers quite a large part of Galloway and Southern Ayrshire is now included in the future strategies of the three Council areas affecting Environment, Sustainability and Tourism that will play such an important part on what we do to enjoy and protect our coasts and countryside."