Celebrations at the McKechnie Institute 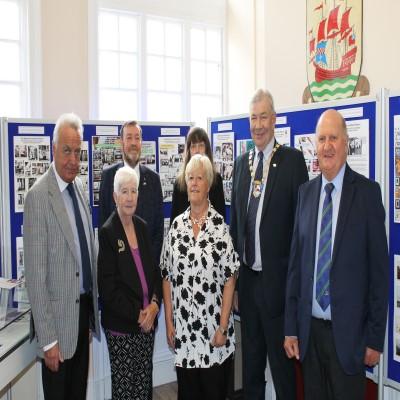 Provost Iain Campbell was joined by local Councillors Alec Clark, Peter Henderson and Gavin Scott and 'The Friends of The McKechnie' at the McKechnie Institute in Girvan on Saturday 6 August to celebrate 40 years of its 'rebirth'.

It's 40 years since Girvan Community Council rescued The McKechnie Institute from closure and dereliction. The building closed as a library in 1975 and re-opened as a museum and gallery on 8 August 1982. Even on a shoestring budget, the Community Council managed to turn the McKechnie into a vibrant Community Arts Centre and Museum for Girvan and South Carrick.

When Dr Margaret McCance (who was the honorary curator from 1982 - 2000) stepped down, The Friends of The McKechnie was constituted to form a working partnership with South Ayrshire Council to secure the future of the building and to further the aims of 'The Friends' in regard to exhibitions and events.

You can find out more about the McKechnie Institute, including opening times here.