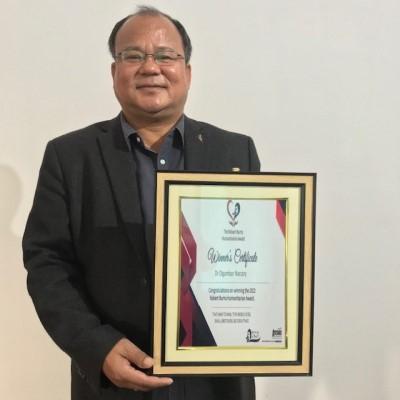 The RBHA is supported by South Ayrshire Council and EventScotland and is the first event in 'Once Upon A Time in Ayrshire', a year-long programme that will celebrate Scotland's Year of Stories 2022, with more details to be announced soon.

Dr Narzary is the founder of an organisation called NEDAN which tackles the far-reaching problems that result from human trafficking.

Since its formation in 2004, it's estimated that NEDAN has rescued and repatriated around 6,100 girls. Thanks to Dr Narzary, these young women have been saved from horrors such as sexual slavery; bonded labour; forced marriage; and the illegal trafficking of human organs.

The rescued children are mentored and encouraged to study, sit exams, and gain further education. NEDAN has also established five drop-in centres in remote communities, and so far, 350 socially excluded children have accessed education through these centres.

The organisation has created a 'Destination Girls Campus' for rescued children, which provides counselling and support to those who don't have family.

NEDAN also works directly with tribal communities to end violence against children. This has led to the establishment of Child Protection Committees in many villages.

On receiving the RBHA, Dr Narzary said: ""I am extremely happy, and overwhelmed to be receiving this award on behalf of the NEDAN Foundation which has been working tirelessly for nearly 20 years to deliver ground-breaking work to help vulnerable children in Bodoland Territorial Region (BTR) Assam North East India. This award will highlight the efforts of the NEDAN Foundation and will help bring the global community together to fight the human trafficking menace in North East India."

Chair of the RBHA judging panel and Leader of South Ayrshire Council, Councillor Peter      Henderson said: "Congratulations to Dr Narzary for winning the Robert Burns Humanitarian Award 2022. Without his intervention thousands of children would have faced a future too terrifying to contemplate. He is shining example of a selfless humanitarian and thoroughly deserves this award. I would like to wish him, the other finalists and all the nominees the very best for the future."

Sister Lucy Kurien works in India and is the founder and director of Maher, a community and interfaith organisation for abused and destitute women and children.

Paul Kasonkomona is a human rights defender and executive director of the Centre for Tolerance and Peace, in Zambia.

As well as the RBHA 2022 title, Dr Narzary receives the equivalent of 1759 guineas (approximately £1,800) - a sum which signifies the year of the Bard's birth and the coinage in circulation at that time.