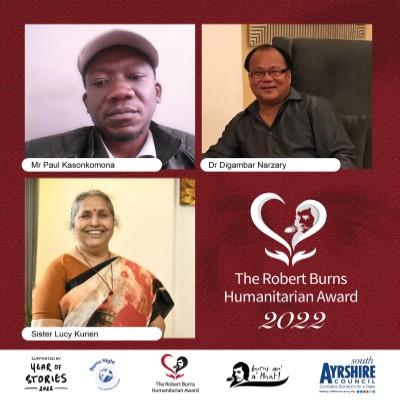 A Doctor fighting for the rights of children, a nun helping destitute women and a Zambian looking to end marginalisation, are all in the running for this year's Robert Burns Humanitarian Award (RBHA).

Part of the annual Burns an' a' that! Festival celebrations, the RBHA is supported by South Ayrshire Council and Event Scotland, as part of Scotland's Year of Stories 2022.

This prestigious award recognises courage; commitment; inspiration; and hands-on humanitarian efforts from people of any nationality; race; age; or gender.

With Burns night fast approaching, Dr Digambar Narzary; Sister Lucy Kurien; and Paul Kasonkomona have all been shortlisted as finalists for the RBHA 2022.

Dr Digambar Narzary is a child's rights activist and founder of an organisation called NEDAN which tackles human trafficking in north east India.

Since its formation in 2004, it's estimated that NEDAN has rescued and repatriated around 6,100 girls. Thanks to Dr Narzary, these young women have been saved from horrors such as sexual slavery; bonded labour; forced marriage; and the illegal trafficking of human organs.

NEDAN also promotes learning, and many of the young people helped by the charitable trust are encouraged back into the classroom, and then on to further education.

Dr Narzary said: "I was pleased to hear that I have been nominated for this award. I am a child rights activist and have been liberating children from modern day slavery for the last two decades. I want to continue my work and provide new lives to children.  I extend my gratitude to all who have recognised my services to socially deprived children and the community."

Sister Lucy Kurien is the founder and director of Maher, a community and interfaith organisation for abused and destitute women and children.

Inspired by Mother Teresa and her work in the slums of Calcutta, Sister Lucy joined the Holy Cross order at the age of 19. In 1997 she founded Maher meaning 'Mother's Home'.

Sister Kurien said: "When I visited Mumbai and then Bombay for the first time as a teenager, I was devastated by the appalling poverty. I resolved to dedicate myself to bettering the lives of the destitute and the poor. Working for them has been a joy.

"I really feel fulfilled that I am being considered for the award, which is in memory of Robert Burns, a great poet and humanitarian devoted to the promotion of human wellbeing and social justice. His empathy for the poor and the vulnerable is particularly appealing to me."

Paul Kasonkomona is a human rights defender and executive director of the Centre for Tolerance and Peace, in Zambia. He champions the human rights of health care workers; lesbian; gay; bisexual; transgender and intersex people; and other marginalised groups.

In 2013, Paul was arrested after taking part in a TV show where he argued that recognition of gay rights was necessary to combat the Aids epidemic in Africa, his acquittal took 22 months.

Through the Centre for Tolerance and Peace, Paul hopes to build an 'informed; empowered; democratic; and peaceful nation'.

Paul said: "Thank you for bestowing me with such an honour and this special nomination. I feel overwhelmed and emotional, and I am at a loss for words, this is a very special moment in my life."

Peter Henderson, Chair of the RBHA judging panel, and Leader of South Ayrshire Council, said: "This year's finalists are truly inspirational. All three are champions for change, giving a voice to those who are often downtrodden and ignored. Between them, they have transformed so many lives. I am looking forward to the end of January when the winner will be announced."

The winner of the Robert Burns Humanitarian Award will be announced via an online ceremony on Tuesday 25 January 2022.

As well as the RBHA 2022 title, winners receive the equivalent of 1759 guineas (approximately £1,800) - a sum which signifies the year of the Bard's birth and the coinage in circulation at that time.