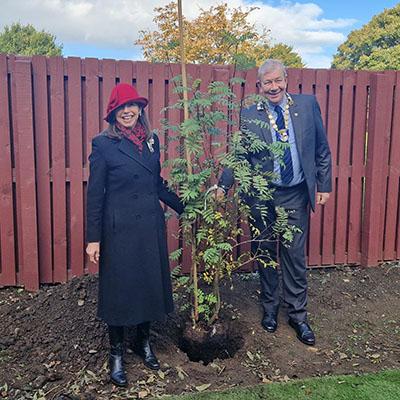 South Ayrshire Womens Aid in Ayr has received the gift of a special tree from The Queen's Green Canopy (QGC) "Tree of Trees" which stood tall as a message of hope, regeneration and optimism to the nation and the world as part of the Platinum Jubilee weekend celebrations. The spectacular 21-metre 'Tree of Trees' sculpture featuring 350 British native trees was b created outside Buckingham Palace as an exciting centrepiece of The Queen's Platinum Jubilee weekend celebrations in June. The sculpture reflects the joyful Jubilee tree planting which has swept the nation as part of The Queen's Green Canopy (QGC), inspiring over a million trees to be planted during its first season, from October to March.

The "Tree of Trees" sculpture placed the importance of trees and nature at the heart of the historic milestone to celebrate the Platinum Jubilee. Her Majesty planted over 1,500 trees all over the world during her 70-year reign The 350 trees that formed part of the sculpture were set in recycled aluminium pots embossed with Her Majesty's cypher and are now being  gifted to selected community groups and organisations to celebrate their work and inspire the next generation of tree planters across the nation.

The gift of the tree is a 'thank you' for all the valuable and tireless work that volunteers and individuals undertake for the benefit of their communities It is also a celebration of the diverse communities that come together for the benefit of all, often using the natural environment to improve health and wellbeing

South Ayrshire Women's Aid joins over 300 organisations from across the UK who were recently announced by the QGC as recipients of these special trees in The Queen's name, which are gifted in a pot embossed with Her Majesty's cypher.

The tree becomes part of the living legacy in honour of Her Majesty, joining over a million trees already planted across the UK as part of The Queen's Green Canopy.

The trees planted across the country in Her Majesty's name will continue to spread this message, in honour of her extraordinary service to her country and her people. It is also hoped that these special trees will raise awareness of the need to plant trees and inspire and encourage people to get involved in tree planting

"We are delighted to be chosen to receive a tree from the Queen's Green Canopy Tree of Trees. As one of over 300 organisations across the UK, South Ayrshire Women's Aid is proud to become part of the living legacy in honour and loving memory of Her Majesty."

"I am delighted that South Ayrshire Womens Aid have been chosen to receive this tree as it recognises the significant contribution that they make to the wider community in  South Ayrshire and that it will take pride of place in their newly designed garden."

"It was a privilege to be involved in the planting of a tree that will become part of Her Majesty Queen Elizabeth II's lasting legacy. The extension of the Queen's Green Canopy (QGC) initiative is a wonderful tribute.

"I think it's fitting that the vital work of the Women's Refuge is recognised in this way."