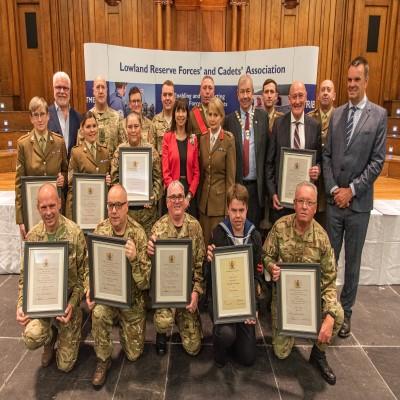 On Tuesday evening, Ayr Town Hall opened its doors to welcome Reservists, Cadet Force Adult Volunteers (CFAVs) and their families to the presentation of the Ayrshire & Arran Lord-Lieutenant's Awards.

In total, nine Reservists and eight CFAVs received Certificates of Meritorious Service in acknowledgement of their unwavering dedication to the Defence and civilian communities both at home and abroad. Many of the Reservists in attendance received high praise for the work they carried out supporting the nationwide testing and vaccination programmes throughout the COVID-19 pandemic.

'I feel very proud to have been nominated for this award,' said Sergeant Thomas Stott, who has served with 6 SCOTS for over twenty years. 'I was so shocked just to find out I had been nominated, I've never received anything like this before so it means a lot to me.'

Sergeant Major Instructor Andrew Garmen, a CFAV with West Lowland Battalion Army Cadet Force, was equally delighted to receive a certificate: 'It's a great feeling to be recognised in this way for the work we do in the community. We're always looking to make young people's lives better through Cadets and give them opportunities that might not be available to them otherwise.

Sheriff Iona McDonald OBE, His Majesty The King's personal representative for Ayrshire & Arran, signed and presented each certificate to thank the recipients for their significant contribution to Defence.

'It is my great pleasure to congratulate this year's recipients of the Lord-Lieutenant's Certificate of Meritorious Service,' said Sheriff McDonald. 'Reservists play a crucial role not just as dedicated members of the Armed Forces, but also as hard-working civilians, contributing their time and broad-ranging talents to both their units and the wider community every day.

'I would also like to thank and congratulate the Cadet Force Adult Volunteers who commit so much of their time and knowledge to giving Cadets the best possible experience, helping them develop the skills and confidence to succeed in later life and make lasting friendships along the way.'

Following the presentation of the certificates, Lowland RFCA's Head of Engagement Colin Vooght paid an extra tribute to one of the recipients, Captain Graham Reith of A Squadron, Scottish and Northern Irish Yeomanry, presenting him with HM The Queen's Platinum Jubilee Medal and commending him on almost 50 years of service to the Armed Forces.

The award ceremony also provided an opportunity to recognise the local employers who support the Defence community through their Armed Forces Covenant and Employer Recognition Scheme (ERS) pledges. To that end, Mr Mike Stewart of Prestwick-based Chevron Aircraft Maintenance was invited onstage to receive a Bronze ERS Award on behalf of the organisation.

To close the ceremony, Deputy Military Secretary Reserves Brigadier Gill Wilkinson gave a special acknowledgement not just to the Reservists, CFAVs and employers in attendance at the event, but also their family members, thanking them for the support and resilience they show when their loved ones depart on training exercises and deployments.

'It is you who must cope with our absence,' said the Brigadier. 'In many respects, your commitment is as great as those who serve.'