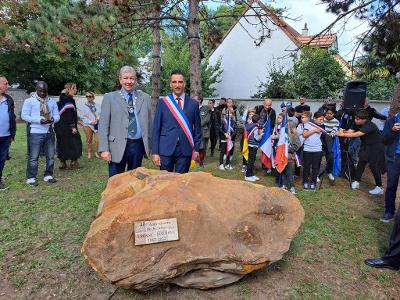 In 1982, a small delegation from Maybole made their way to Crosne to explore the possibility of the towns linking up. In November that year a charter was signed and following this, many friendships have flourished which now span over several generations.

Provost Campbell, who was accompanied by Maybole Councillor, Brian Connolly, was invited to spend a few days in Crosne to mark the occasion which was commemorated with a range of events including the unveiling of a plaque to mark the 40th anniversary, an 'Auld Alliance' conference, a gala dinner and Scottish Games.

The Mayor of Crosne, Michaël Damiati, was also present during the festivities and addressed the crowd who came along to enjoy the celebrations.

Provost Campbell said: "It was a privilege to represent Maybole at this special anniversary event.  Forty years' town twinning is a huge achievement and is down to the hard work, commitment and devotion of all those involved.

"I'd like to especially thank Maybole Town Twinning President David Kiltie and the Town Twinning for their assistance on this trip to Crosne, and also Maybole Pipe Band who did us all proud during the visit.

"Although Crosne and Maybole are separated by hundreds of miles, both towns have a real sense of community, which really shone through during my visit.  I'd like to thank the people of Crosne for making me feel so at home and I look forward to returning the warm welcome in the future."