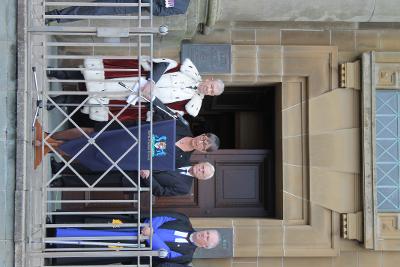 South Ayrshire Council's Chief Executive Eileen Howat officially delivered the local Proclamation of the Accession to the Throne of King Charles III at County Buildings in Ayr on Sunday 11 September.

South Ayrshire's Provost, Elected Members and the public gathered to hear the Proclamation, as part of a long-standing tradition where the Accession of the new monarch is announced across the country.

His Majesty was formally declared head of state at the Accession Council which took place at St James' Palace in London on Saturday 10 September following the passing of Her Majesty Queen Elizabeth II. Local proclamation ceremonies took place across the United Kingdom the following day.

South Ayrshire Council's Chief Executive, Eileen Howat said: "I know the passing of Her Majesty Queen Elizabeth II has deeply affected many people across the country.

"She was the longest-reigning British monarch in history, the longest-serving female head of state, and was admired by people from all walks of life.

"It was a great honour to read the proclamation of King Charles III and to wish him well as he takes on his new role."

South Ayrshire Provost Iain Campbell said: "Proclamation ceremonies are historic occasions where we pledge our support and loyalty to the new monarch.

"It was a privilege to have been part of South Ayrshire's Proclamation and to formally announce the Accession of His Majesty King Charles III.

"Like many others, I'm deeply saddened by the loss of Her Majesty Queen Elizabeth II. For seven decades she has been a steady presence and served the nation and the Commonwealth with unparalleled devotion. I'd like to extend my sympathies to Her Majesty's family on behalf of the people of South Ayrshire."